Desert Subterranean (Termites of the Southwest)

If you are experiencing problems with a termite species that has been identified by your pest management professional as Desert Subs, it’s highly probable that you are living in an area of the country that experiences dry or even arid conditions. In fact, Desert Subs are commonly distributed throughout the lower deserts of northwestern Mexico, southern California and southern Arizona.

And if your pest management professional has recommended a treatment program that includes Termidor termiticide/ insecticide, one of the most tested termiticides in history, there are a few important facts you should understand about the behavior of Desert Subs compared to more common subterranean termites such as Formosan or Eastern Subterranean.

Some quick facts about Desert Subs

Able to survive in drier conditions than Formosan or Eastern Sub termites.

Soldiers of Desert Subs are characterized by their slender and straight mandibles in contrast to the relatively thick, curved mandibles of Formosan or Eastern Subs.

Their small size and ability to forage under dry conditions allows them to occupy a niche not exploited by other subterranean termite species. 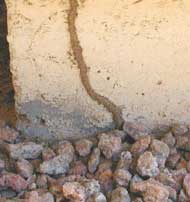 Preliminary research suggests that baiting for Desert Subs requires more time than for others. Given the small size of Desert Subs soldiers and workers, they are apt to penetrate smaller cracks in concrete and masonry that are too narrow for foragers of other subterranean termites to enter.

Subtle differences in foraging behavior do exist. Foraging tubes are lighter in color, narrower, and more circular. Sometimes, Desert Subs will openly build very narrow, free-hanging tubes from ceilings, shelves and overhangs. Don’t be surprised to see tubes as long as 6 to 12 inches in length. These tubes are often re-used by Desert Subs even when there is no feeding activity. Size of foraging tubes does not necessarily equate to “damage.”

Regardless of the species, Termidor takes no prisoners
Because Desert Subs may behave a little differently than other subterranean termites, it doesn’t mean that Termidor acts any differently. Tests have shown that Termidor is 100% effective at eliminating subterranean termites in three months or less. No exceptions. No excuses. Even after treatment, don’t be alarmed if you still see foraging tubes. It doesn’t necessarily mean termites are feeding on your home. In fact, Desert Subs may continue to build tubes, although they’ve probably stopped feeding.

Termidor is a non-repellent
That means Desert Subs can’t see it, smell it, or feel it. Since they don’t know it’s there, they forage freely in a treated area. So, if you see a foraging tube after your home has been treated with Termidor, don’t be concerned. Travelers are a good sign. That means Termidor is getting a chance to work.

Remember, Termidor still kills individual Desert Subs termites two ways
First, Termidor kills termites when they eat it (since they don’t know it’s there, they ingest it readily). Second, unlike all other termiticides, Termidor is lethal to Desert Subs by contact. So, even after feeding has stopped, termites will continue to die from the effects of Termidor.

Desert Subs will also unknowingly pick up Termidor and carry it back to the colony on its body. Every other termite it contacts, feeds, or grooms will itself transfer Termidor, contacting and infecting others. This unique mode of action is known as the “Transfer EffectTM”. At the same time, the active ingredient in Termidor, fipronil, is slow acting. That’s a very good thing for you, and a very bad thing for the Desert Subs colony. Why? Because Termidor remains active long enough to transfer the termiticide to a large number of termites in the Desert Subs colony before dying itself. And although the Termidor effect on individual termites is intentionally slow, the overall colony impact is fast: it can be 2-6 times faster than bait systems.

What to expect after application
Certainly, every home is different. So treating your home with 100% effective Termidor depends on its age, configuration, and construction. Your Termidor Certified Professional will explain the best procedure for your situation. The entire application program is typically completed in a day or less. However, you may continue to see some tubes for up to 90 days, even though Desert Subs may stop feeding within days after application. That’s okay. Termidor’s unique ingestion, contact, and “Transfer Effect” manages colonies and provides 100% control in three months or less. No excuses. No exceptions.

One of the most tested termite solutions in history
Before Termidor was made available to American homeowners through Termidor Certified Professionals, it was subject to some of the toughest tests in history. For 8+ years, grueling USDA-Forest Service ground board and concrete slab trials in four states tested Termidor. At every application rate and every last location, Termidor proved 100% effective. 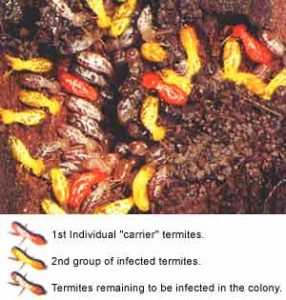 The active ingredient in Termidor is fipronil and it works quite differently from other termiticide active ingredients. Most termiticides are repellents, which means they keep termites away from a treated area, rather than killing them. These repellent termiticides also kill termites. However, since the termites are repelled when they come in contact or just before actually contacting pyrethroid treated soil, the ‘killing power’ is less dramatic and if anyone took the time to count dead termites, less efficient. Termidor is non-repellent. Termites can’t detect it. Since they don’t know it’s there, they forage freely in a treated area.

Like other leading liquid termiticides, Termidor is lethal to termites when they ingest it (which they do readily since they don’t know it’s there). But, unlike all other termiticides, Termidor is lethal by contact as well. Once a termite comes into contact with Termidor, they carry it back to the colony on their bodies. Every other termite it contacts will itself become a carrier, contacting and infecting others. This is known as “The Transfer Effect”.

Termidor – 100% Results After 8+ Years
With Termidor, termites are killed, dead. No excuses, and a lot less waiting around. Government and other tests in the US and abroad have shown that in 8 years there has been no break or reduction in Termidor’s effectiveness.

Termidor is a responsible, low dose treatment
Termidor is effective at very low application rates. Typically, when your pest control professional applies Termidor, the active ingredient fipronil will be just 0.06%. That’s a lot lower than old-fashioned termiticides and less than most insecticides. Termidor also binds to the soil, so there’s no leaching through rainfall or irrigation.

You can find out more about which cookies we are using or switch them off in settings.

This website uses cookies so that we can provide you with the best user experience possible. Cookie information is stored in your browser and performs functions such as recognising you when you return to our website and helping our team to understand which sections of the website you find most interesting and useful.

Strictly Necessary Cookie should be enabled at all times so that we can save your preferences for cookie settings.

If you disable this cookie, we will not be able to save your preferences. This means that every time you visit this website you will need to enable or disable cookies again.